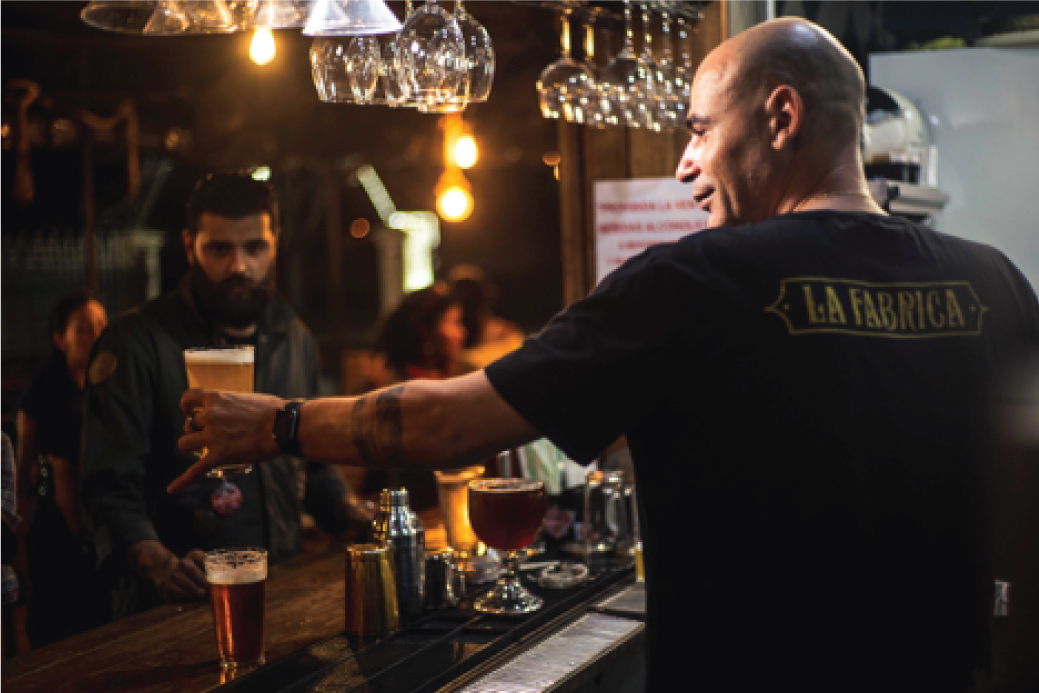 La Fábrica is a Brewhouse complex that features International Brewers, an authentic craft brewery and a Gastropub in the same location, whose originality lies in the in-house elaboration of practically all its gastronomic offer. From the many beers served with original handmade siphons, to the daily fresh baked bread; each detail serves to present an elaborate menu where the original flavors and homemade ingredients are reflected in each of the dishes created to surprise.

The brewmaster of La Fábrica, also in charge of International Brewers, is known as “El Dictador”, who has come from far far away to revolutionize the national beer market by creating four different presentations that have a great receptivity among beer lovers. These are: El Dictador, an original IPA full of incredible aromas, unexpected flavors and like any supreme leader comes to share its blessing to the people. Las Américas, in honor of the Bridge of the Americas, prepared with a local herb that gives an incomparable sweetness, becoming the most popular beer in La Fábrica.

La Capunga, a lager type beer with velvety texture, whose recipe comes from a brewery in Brazil and is considered the best sellers. Finally, The Transporter, is a light Porter that comes to break paradigms, just take one sip and you will discover its greatness! Soon more creations will surprise you, including wheat beers.

Each beer is a world by itself and the idea of International Brewers is to open the doors to this vast universe of flavors and recipes to young generations interested in producing their own beer through the “Open Source Brewing”.

Assisted by El Dictador, you will be able to prepare and present your beer to the costumers of La Fábrica, who will be the final judges. The possibility of including it in the fixed proposal of the restaurant and the privileged distribution chain of International Brewers will depend on its acceptance. Also, craft breweries interested in making an exchange of knowledge are invited to visit as well.

At International Brewers, the entire production process is attended by a dedicated and experienced team, who follows each step of brewing to its distribution and presentation, always guaranteeing the necessary stock to their clients. Their strength and quality lie on the exclusive production process, from bottling, filling barrels, labeling and personalized distribution, which guarantees the best control throughout each phase.

Under the openness to knowledge approach, International Brewers organizes beer tours to learn about the processes and ingredients necessary in the elaboration of this precious liquid, together with a tasting and a nice souvenir at the end of each tour, as well as the possibility of staying at La Fábrica to enjoy an “endless night”. These guys also organize beer catering for weddings, events, private parties, concerts and soon, professional courses.

La Fábrica has a complete bar with varied wines, elaborated mixology and craft beers from Panama, with more than 13 breweries to support local production. All this in an outdoor environment, relaxed and open to everyone, from friends, families, couples and pets, who are often the most spoiled.

The renewed menu offers many starters to share, which are perfectly integrated with the gastrobar concept. In addition to beer, hummus and burgers are another specialty of the house. Among the newest inventions highlights Dterminator, a burger with secret mixture of meat and a surprise ingredient, chicken breast and eggplants stewed with Capunga beer, that will simply amaze you! El Tank, with 350gr of Rib Eye, roast beef, fresh lettuce and delicious chef’s sauces is another great burger. In turn, two delicious desserts were included in the menu; Malabi de Estrella, very popular in the Middle East and “Corrupción”, an exaggerated dessert with chocolate brownie and three types of ice creams.

Sorry, the comment form is closed at this time.